Christmas Day dawned beautiful and mild. After a relaxed morning–with personal Bible time and exercise–Dad and Jesse made breakfast. It’s been a tradition that the guys make Christmas breakfast.

Meanwhile, Anna and I worked on disguising Mary’s gift. Our family has some very good guessers, so unless one disguises the present (hint: wrapping a gift in the original box is not a good enough disguise), the recipient might just guess it. Mary also baked more cookies for the police force as we like to give them a cookie basket on Christmas! The girls had already worked on making some of the cookies earlier.

We love putting time and thought into finding the right gift for each other.

How was your Christmas celebration? I’d like to know! 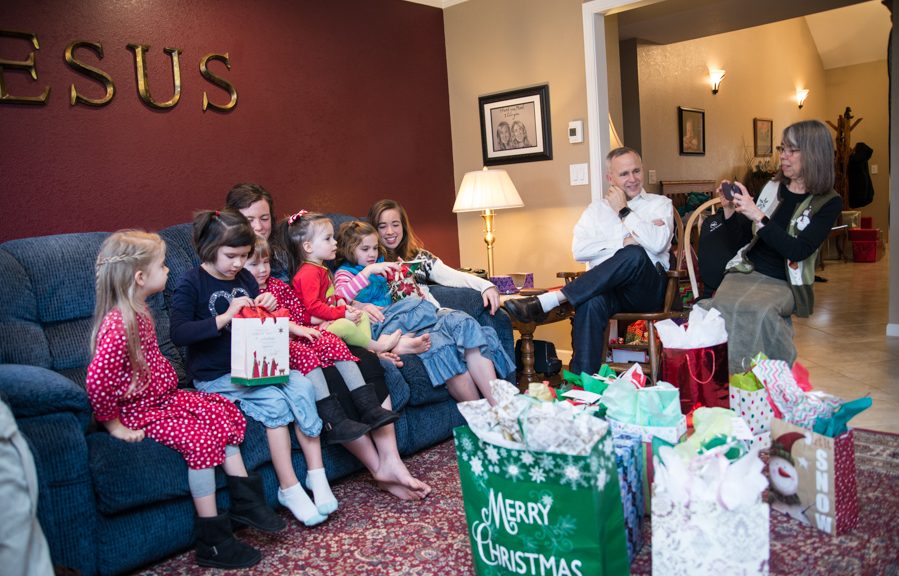 I want to share a peek into our very special Christmas celebration with my married brothers, their families, and Gigi.

Years ago, when Nathan and Melanie were first married, we settled on Christmas Eve as the day we would have with the extended family. Melanie’s family got together on Christmas Day, so this made it perfect. Then on Christmas Day, Dad, Mom, Anna, Mary, Jesse and I celebrate. Watch for that post soon. There are too many pictures to combine both! 🙂

This is our second year to try a new approach to the big Christmas celebration. Each niece or nephew gives to one aunt or uncle and vice versa, and then all the Maxwell grown kids give to one married sibling or spouse, and then all the nieces and nephews give to one cousin. My parents still give to everyone and vice versa. Anyway, I loved, loved, loved seeing the little kids’ delight as they often sidled up close to the aunt or uncle and watched them open the gift. Then, the same thing happened when they gave to a cousin.

“Keep yourselves in the love of God, looking for the
mercy of our Lord Jesus Christ unto eternal life.”
Jude 1:21

We want to wish you all a joyful Christmas filled with
Jesus coming to earth and giving His life for us!

“But made himself of no reputation, and took upon him the
of a servant, and was made in the likeness of men:
And being found in fashion as a man, he humbled himself,
and became obedient unto death, even the death of the cross.”
Philippians 2:7-8

Now that we’re onto another second sister-in-law recipe, you may have figured out what we’re doing. A blog reader requested the sisters-in-law favorite Christmas recipes! So, we’re working on fulfilling that.

We use a basic roll dough, which is one that has been previously posted on the blog, but I’ll post it again.

Recently I oversaw the making of these cinnamon with Nathan and Melanie’s kids so we could document it for the blog. The kids really did pretty much all of the work. These are awesome cinnamon rolls.

Maxwell’s Favorite Cinnamon Rolls
(if you want to see the step-by-step instructions,
this is the link to our Light and Fluffy Rolls
which is what we used)

1 1/2 Tablespoons (heaping) yeast
1 Tablespoon sugar
3/4 cups warm water (100-110º)
1/4 cup butter
1/2 cup milk
6 TB. honey or granulated sugar
1 egg room temperature (Put egg in bowl with hot water to warm it for a couple minutes.)
1 teaspoon salt
1 Tablespoon dough enhancer (optional)
4 1/3 cups flour – white or wheat or a mixture (This is measured by scooping the flour into the measuring cup and leveling it off with a knife.)

Step #1: Heat water to 100-110º. Pour warm water into a mixing bowl. Add yeast and sugar. Gently mix together with a spatula and let proof for 5 minutes.

Step #2: In saucepan, melt better. Then add milk and honey until warm.

Step #3: Pour the milk+honey+butter mixture into the yeast mixture.

Step #4: Turn mixer on, and add egg, salt, dough enhancer, and a cup or two of flour. Finish adding the rest of the flour and knead for 7 minutes.

Step #5: Place dough in oiled bowl, cover loosely with plastic wrap, then put in oven at 120º to rise for an hour. I heat the oven up to 180º and then leave the door open until the temperature drops.

Let rise until doubled (about an hour). Lightly flour hands and top of dough as often as needed. The dough might be slightly sticky.

Step #6: Punch dough down. Divide into thirds. Roll one portion out. A key is not to make it too tall. Otherwise, your rolls will be huge. Brush with melted butter. Then, sprinkle on 1/3 of the brown sugar + cinnamon mixture. Tightly roll up, and then cut (we use floss).  Put in a greased pan. Let rise until doubled (I put ours in a warm oven). Take out of , preheat to 375º, and then return rolls to oven and bake until golden brown (around 15 minutes). Do not over bake! Frost with your favorite frosting recipe. Ours is a standard Betty Crocker buttercream icing.

“Butter and honey shall he eat, that he may know
to refuse the evil, and choose the good.”
Isaiah 7:15 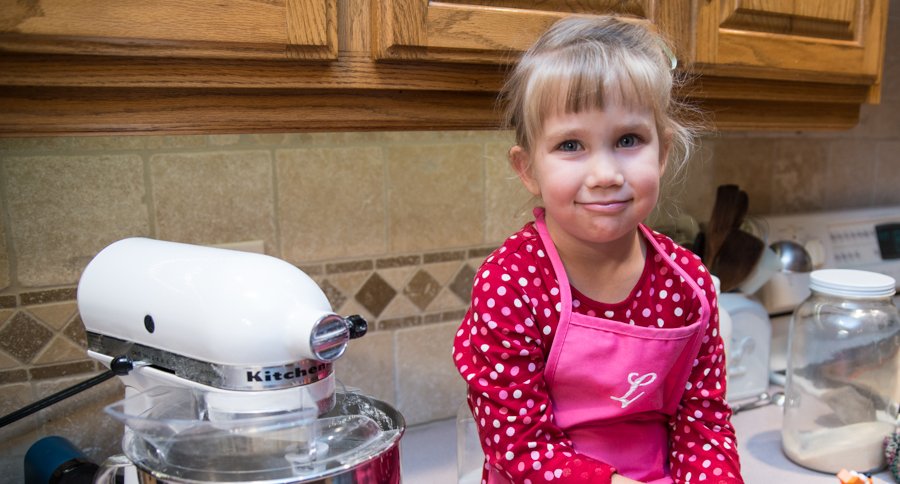 Y’all, I think we’re officially in the Christmas season! I’m excited to share with you Anna Marie’s favorite cookie recipe. It’s simple to make and easy to include littles.

Cream butter and sugar. Add vanilla and mix well. Add salt and flour (1 cup at a time). Form 1-inch balls and roll in sugar. Stamp with cookie stamp. Bake at 350° about 8 minutes or until edges are barely turning golden. Enjoy about 3 dozen cookies.

“For unto us a child is born, unto us a son is given:
and the government shall be upon his shoulder:
and his name shall be called Wonderful, Counsellor,
The mighty God, The everlasting Father, The Prince of Peace.”
Isaiah 9:6

One of the joys of our blog is hearing from YOU. So when we received this e-mail below, we couldn’t help but smile and share it. This reader we’ve loved for years (and met in person!), and she gave permission for us to use her story. Totally down to earth and amazing writing!

Well, we did it. WE CAROLED. In true Team E fashion. Nothing about this adventure was particularly elegant, but a lot of fun was had! The children chose the slowest, longest carols out of the songbook and practiced them. The dirge-like sounds that filled the house were music to only God’s ears! Then they picked some peppier carols, thank goodness, because no one should be subjected to all seventeen-gazillion verses of The First Noel against their will. Then we made cookies of varying sorts; have you heard of chocolate crinkle cookies? They’re supposed to have a lovely cracked-powdered-sugar look. Supposed to!

We picked the street nearest us with the fanciest light display and trotted off bearing baggies filled with cookies. Everyone had hats and coats and mittens THAT MATCHED which means I’m an excellent mother. We didn’t warn anyone we were coming, and at a few houses we just sang in the driveway, unheard—but that was good, for various melodious reasons—and prayed for those houses anyway. How can you not feel prayerful when you’re singing Hark the Herald?! One or two folks were home, and they got cookies AND hugs (our youngest is a hugger), and one neighbor said she’d been caroling before but had never been caroled TO. (She seemed to indicate this was a blessing. And she took the cookies.) Our son was happy to tromp through the snow to deliver cookies on the doorsteps of people who weren’t home. I didn’t have the heart to tell him that the fancy front doors aren’t necessarily where one enters the house up here; New Englanders often enter through the back or side door and leave the front door for show. But I hope they got found anyway! Otherwise, mice. Hmm, maybe I should do a drive-by and check …

Anyway, we had so much fun we got in the car and drove to a widow friend of ours, who greatly appreciated our carols, and then to another family who are empty-nesting. I didn’t realize what a lost tradition it is, at least in our cold, dark neck of the woods!

The kids want to make it a tradition. I’m all for it! I might even plan stuff in advance! Thanks for the inspiration.

Wasn’t that amazing? If you’ve been inspired from something (anything!) on the blog, we’d love to hear about it.  We’re excited to share what the Lord’s doing here at the Maxwells and Titus2. 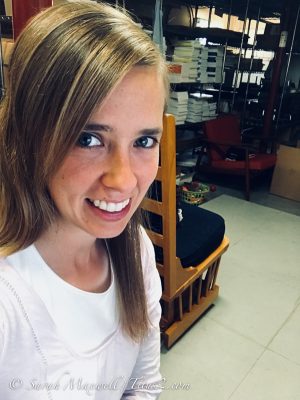 “For from you sounded out the word of the Lord not only in
Macedonia and Achaia, but also in every place your faith to God
ward is spread abroad; so that we need not to speak any thing.”
(1 Thessalonians 1:8)