We’re very excited to give you the final part to Amos’ house story. His testimony shows how it is possible for a young man to start off debt-free. If you missed Part 1, you can read it here.

I got a used water heater from a neighbor, which is still serving us 10 years later without trouble. I bought windows and a used door from another person. My grandpa procured some interior doors that the company he worked for was getting rid of. Some friends of my wife’s family gave us their used (but working!) washer and dryer. I also got a used fridge and stove. Instead of cabinets, I made shelves from some plywood crates I tore apart but eventually I replaced these with normal cabinets. 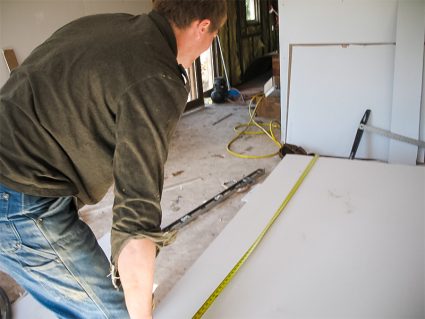 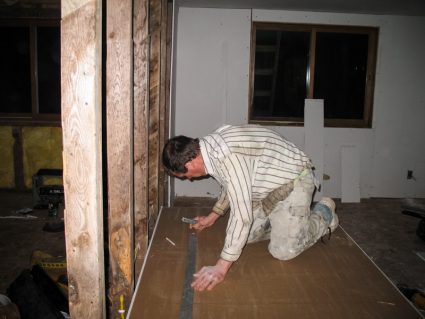 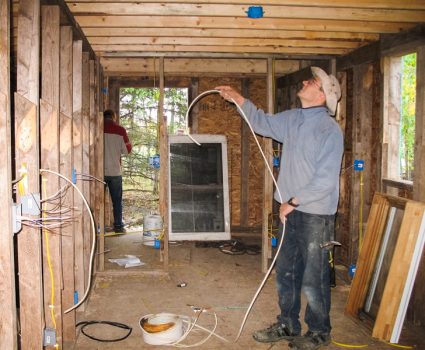 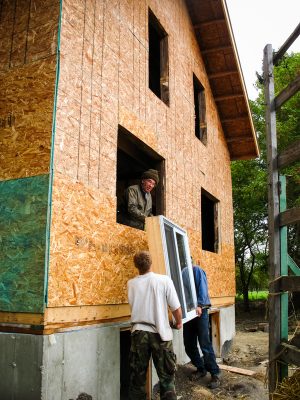 Most of the building was done by my family and myself but a lot of others helped. I traded a calf to a carpenter from our church for a couple days of help, and he loaned me a book on general contracting, which was very helpful. We didn’t have high speed internet then, and I don’t recall googling how to do anything. We did all the plumbing ourselves and the wiring too.

The week before I headed to my wedding, some friends from a few hours away drove up and helped finish mudding and painting the drywall on the main floor. The second story had no inside walls framed yet and no insulation in the roof so we lived on the first floor for a while. When I was gone on my honeymoon, my family laid some flooring and finished getting things livable. The house was only covered with house wrap, but a couple years later I put on siding.

I believe that if a person is committed to remaining free of debt and is trusting God to provide, He will do so. One may need to start small and patiently move forward, but life is not about the things we possess. If we are willing to learn, work, and be creative, I think that much more can be accomplished, in saving money and buying, or in building a place, then what might first appear. I’ve also found that often people in one’s church and family are willing to share knowledge and help in various ways, especially when they see a young man with a worthy cause.

Here are a few more testimonies from people I personally know.

In closing I’d like to share a couple specific ideas that have become part of my thinking, and I think probably come from your materials. One is avoiding expensive hobbies like flying planes. Another is viewing computers as tools and not as toys. Thank you for teaching truth.

“That the generation to come might know them, even the children
which should be born; who should arise and declare them to their
children: That they might set their hope in God, and not forget the
works of God, but keep his commandments.”
Psalm 78:6-7

Mark, the young man who bought his house debt free and his two brothers read Buying a House Debt-Free. They report that the book was an encouragement to them, and they discussed, as a family, the biblical principal of living debt-free and being content in Christ.

We Maxwells have a vision for families and the children in them learning to be content in Christ and live debt-free lives. With that seed planted in the heart, what seems impossible—a young man purchasing his first house debt free—can become a reality. It is true for our three married sons and our two unmarried sons have the finances to buy their homes debt free. In Buying a House Debt-Free, we share multiple stories of young men who have purchased their homes debt free and give practical steps toward that goal.

The story of Mark is yet another one that we hope and pray will not only inspire you but also motivate you—to own debt-free convictions, to live them out, to teach them to your children, and to read Buying a House Debt-Free if you haven’t already.

The exciting “end” of Mark’s story (see Part 1 and Part 2)? He just got engaged!

“The rich ruleth over the poor, and the borrower
is servant to the lender” (Proverbs 22:7).

Recently we began the story of a young man who wanted to purchase a home for his soon-to-start family. He had gained skills during high school years, had a solid job, lived at home, and saved his money. Houses were still out of his price range, but he was committed to remaining debt free so he looked at his possible options. Here is the rest of his story:

Every offer Mark made over the last several months was too low since others had more money, or an investor bought the house. We became discouraged but intensified our praying.

About 1 week ago, we received notice of a 1700 square foot brick house that was a foreclosure, and it was only about 1 mile from where we live. The real estate agent showed it to Mark and myself (his Dad), and we were convinced it could be fixed up. The asking price was $40K below the assessed value.  We prayed and asked the Lord for wisdom.

Mark put in a bid two days later. We found out yesterday morning that the bank accepted his bid! After he closes on it, he will have approximately $10K in the bank to start fixing up the interior. Also, since it is so close to our house, he will have minimal travel time and maximum time to spend fixing it up.

Mark waited on the Lord, experiencing many disappointments, but then was rewarded with a better house than he could possibly have dreamed of owning. The Lord is good.

“The LORD is good unto them that wait for him,
to the soul that seeketh him” (Lamentations 3:25).

We are excited when we hear stories of young men who have committed themselves to debt-free living and then are able to purchase their first home debt free. That is the theme of our book Buying a House Debt Free. We are delighted to share this story with you about a young man who read that book and was inspired. Our hope is that his story will inspire you and your children.

Our 2nd born son, Mark, began courting last October. The courtship is going well, and he and the young lady he is courting are ready to get engaged once he has purchased a house.

Mark lives at home and is an air conditioning mechanic working on commercial refrigeration in Jacksonville. We live in a small rural community north of Jacksonville.

Mark has saved a significant amount of money but not near enough to buy a new house or buy a piece of land with the intent to build.

He remained committed that he would pay cash for the best deal he could find. We did much praying and looking and helped him look. The Florida real estate market is such that prices are typically overpriced. n Mark’s case, this meant the best he could find was a used mobile home on a couple of acres.

We looked at nothing but HUD foreclosures in Nassau County (north and west of Jacksonville). In some cases, these were 20 to 30 miles from our residence. Mark has great building skills and helped me build a 2-story addition in 2011, so gutting and fixing a foundation home or mobile home was not beyond his skill level.

This story will be continued in another blog post.

Seems like everyone has heard someone bemoaning their school debt. US News reports that the average college grad has more than $35,000 in school loans. That is a lot of money. Young families often struggle greatly under such a burden, and it puts tremendous pressure on a fledgling marriage. What if both husband and wife have loans? Trying to pay behind for “success” might be the greatest obstacle to their being able to attain it.

Now, picture raising your children with the mindset of paying in advance for success. They learn to make the most of their youth years. From twelve on up, they use their time preparing to be skilled adults while making a reasonable income in exchange for their time. This does not mean that they don’t have fun. They just find beneficial ways of having it. Instead of video games, they thrive on the enjoyment that comes from learning. Instead of hanging out with friends, they work out with siblings or dad or mom, which build strength and family relationships.

Soon they will seek the endorphins adult-type achievement brings as opposed to skateboards and amusement park rides. All choices involve a trade. Will they trade up or trade down for the value of their time? Likely, those trades will have great bearing on the value of their future vocational time. What their time is worth to others will directly correlate with how much time they will have available for their future family and serving the Lord.

Pay for success in advance.

“The thoughts of the diligent tend only to plenteousness;
but of every one that is hasty only to want” (Proverbs 21:5).

It takes money to live, and sadly for many, money becomes their reason to live. “The idols of the heathen are silver and gold, the work of men’s hands” (Psalms 135:15). Food and procreation can have a similar hold on people’s lives becoming their joy, passion and primary purpose in life.

What really is your purpose with money? Is it to make you happy, to have fun, to eat, or …. is it a means that your Lord directs its use of to make a difference in the world? Everything is His, and He graciously extends the use of it to us for His purposes. “The earth is the LORD’S, and the fulness thereof; the world, and they that dwell therein” (Psalms 24:1).

A good way to self-evaluate the place your money has in your life is to analyze your budget. (Don’t have one? Make one and use it. Not having one is a pretty good indication of a likely problem.)

As you look at each category that money is spent on and how much, ask yourself tough questions. Is the Lord pleased and the One ultimately directing in this area? Is this selfish or wasteful? What place does giving have in your budget?

Unless money has its correct position in our lives we will struggle to be content in Christ and debt-free. Growing up years will have had a significant impact on your attitude about money. We can’t ignore the impact of our choices on shaping our children’s attitude toward money.  Are you committed to your children being debt-free?