Dusk is falling, and we are settled in at a hotel in the mountains of Asheville! It’s hard to believe we only have a week and a half left on the road. We have a one-evening conference in the Asheville area tomorrow evening.

Our weekend in Winston-Salem was wonderful. We started out Friday evening with our music session. I’m very grateful that Jesus has given us opportunities to play together. As Dad shares, only a few have natural musical talents (meaning they could literally pick up an instrument and play it with hardly any practice!), the rest of us have to work hard to learn. On our FamiliesforJesus site, we list some resources we’ve used to self-teach ourselves without instructors, http://www.familiesforjesus.com/music/ When the session was over, we had a little "Visit with other Moody readers&qout time. A mom had requested this, so it was a delight to be able to talk to children who have enjoyed the Moodys. They motivate me to continue working on Spring!

Saturday, I briefly chatted with a couple who had come from the Kingsport, Tennessee area, several hours away! A number of other families had driven two or more hours as well. We are blessed beyond measure to have these dear families come. The coordinators for the conference even provided meals for us throughout the weekend. Thank you!

This morning, as we headed to Asheville, we listened to a message by Dr. S. M. Davis, How to Humble Yourself. It was incredibly convicting to me personally. It’s a CD that would be good to listen to several times!

We are deeply grateful to those of you who have been praying for us. May Jesus richly bless you and your family.

Only for my Savior,
Sarah

Last weekend’s conference in Fayetteville went extremely well. Our music session hadn’t been scheduled, but after discussions with the church elders, it was decided to squeeze it in Saturday during the long lunch break. The family scrambled to set up the sound system, and tune instruments. We love to be able to play and sing at our conferences because it allows those attending to see our whole family together.

Heritage Bible Church, which invited us to speak and sponsored the conference, is a family church without programs. If you live in the area, you might want to look into it if you want a family integrated church.

We haven’t had time to tell about our first weekend conference in the Wilkes-Barre, Pennsylvania area. Grace Covenant Baptist Church hosted the conference. We ended up outgrowing their building, and the pastor’s family found another church in a nearby city where the conference could be held. Grace provided Friday evening dinner, Saturday breakfast and lunch for the entire conference at no cost. We loved seeing the servant attitude demonstrated by the church as they foresaw the needs to those attending the conference and then met those needs with the provision of meals. Grace Covenant Baptist Church, in the Wilkes-Barre, PA area, is another family church without programs.

Monday and Tuesday evenings we were in Rocky Mount. Again, we were pleased to see the response to the message God has allowed us to share in our conferences. The Rocky Mount and Wilson homeschool groups blessed us by giving us a surprise birthday cake for Jesse, who turned 12 on Monday. 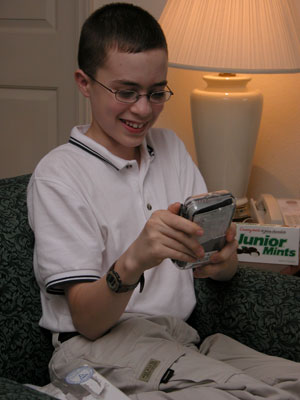 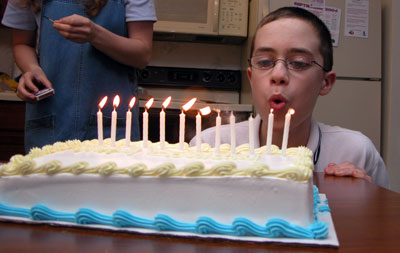 We have been overwhelmed by the expressions of love shown us on this trip. Thank you to everyone.

Mom gave a ladies’ mini-conference in the Raleigh area this morning. We girls manned the book table, and the guys helped with getting more chairs when we ran out of room, opening doors, and helping with the tear down afterwards. We also squeezed in a few songs at the end of Mom’s last session. 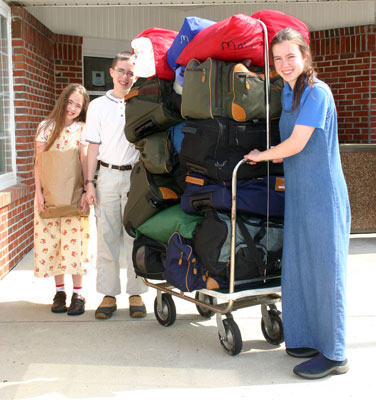 Joseph took this picture earlier this week; it always takes more than one trip with the cart!

Last night’s (Thursday) conference in Lynchburg went well. My joy is being able to share with young ladies in the girls’ workshop. I was thrilled when Dad told us on the way to the hotel last night that three fathers said they were going to give up their TVs. If only one father had a heart change for the direction of his family from each conference, this trip would be totally worth it! Praise Jesus for working in the hearts of those attending.

We’re working on our setup and tear down procedures of the book tables. The girls (Anna and Mary) do an incredible job with the book table set up. I used to do most of it myself, but they are now trained to set up the whole thing by themselves. The guys hand truck in the tubs and boxes that we need. 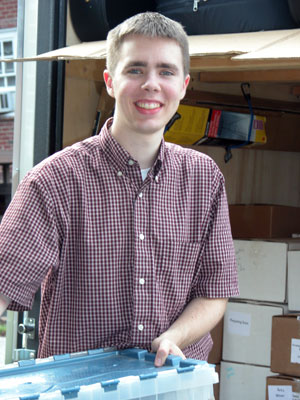 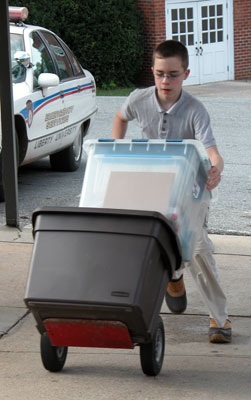 We’ll try for some tear down photos at a future conference.
Only for Jesus,
Sarah

We finished our two-evening conference in the Oneonta area (upstate New York). Jesus greatly blessed our time! Our first several days of traveling and conferences had been very intense, so we were grateful for two days to get extra rest and re-energize. We stayed in a small, cute town called Franklin.

Both evenings went smoothly. We were amazed by several families who had driven long distances to come. What a blessing!

A special highlight for me was the visit of a childhood friend of mine and her new husband. They were on their honeymoon, and it worked out for them to see us! The amazing part is they live in Alaska, and we live in Kansas; so it was a miracle to be in the same area at the same time. Lolly illustrated Autumn with the Moodys and Winter with the Moodys. 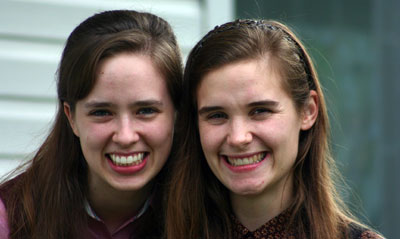 We’re looking forward to doing a one-evening conference in Lynchburg, Virginia. Then, we’ll be doing a conference in Fayetteville this weekend. We’ll work at getting some more pictures.

We’ve enjoyed meeting many families and are excited to see more of you as the trip continues!

This morning came quickly (a little too quickly for several of us who stayed up late finishing trip preparations), and we were all excited about our trip. Grandad, Grandma, Nathan, and Melanie came over to say good-bye, and Grandad prayed a special prayer of blessing and protection for us as we travel. Grandad’s prayer is a highlight to the beginning of our trips. (Notice our sweet Golden in the middle? She’s always sad when we leave, but Nathan and Melanie take good care of her!) 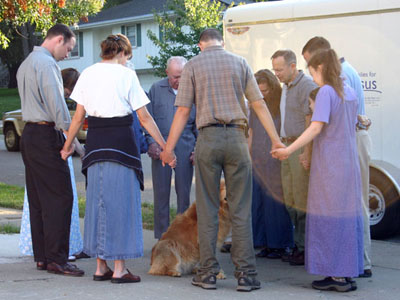 After praying and saying good-bye, we headed out for our month-long trip. Dad could tell our trailer was feeling different than our other trips, so he phoned the place where we bought the trailer. Dad shared in a blog post last week about how right before we leave on a trip, the pressures and trials come. This trip was no exception. Dad had discovered an issue with the trailer last week, so heâ€™d taken it in to be worked on. When the repairs were finished, everything appeared fine. (Dad after he had pulled the van into the trailer garage in preparation for the work we thought would need to be done. But, as it all worked out, we didn’t need it!) 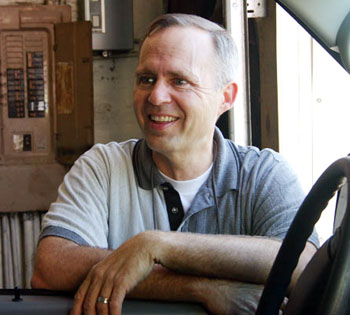 As we hit the interstate and were up-to-speed, the trailer began swaying. Praise the Lord for His protection, and Dad kept control of the van and trailer. We drove to the nearby trailer place, and Dad, Joseph, and John worked at reloading the trailer. We knew that improper loading could cause it to sway, and that’s why we had bought a scale to verify the tongue weight. However, we had weighed it incorrectly. Instead of the 700 pounds of tongue weight we thought we had, we only had 200! So, after the guys had re-proportioned the weight to the correct amount, we were set. Dad praised the Lord over such an incredible answer to prayer.

We plan to drive to Dayton, Ohio tonight. Then, tomorrow, we’re on to our first conference stop, Pittsburgh, Pennsylvania. We hope to meet many of you this trip!

I’m glad I don’t have the job of packing the inside of the trailer. Dad is the expert packer! 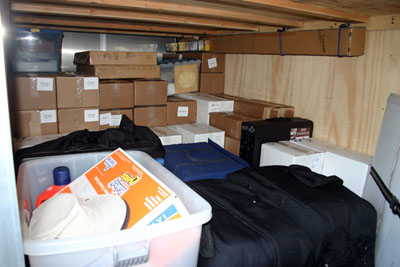 Dad and the boys had packed all the heavy books and other books last night. This morning they loaded all our personal bags and other things. 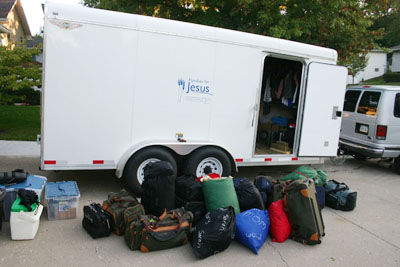 Friday night was another successful night at the fair. As the nights progressed, we recognized quite a few people who came back each night to get something cold to drink. We worked at giving them a new tract and asking them if they had read the one we had given them the night before.

One girl in particular called me her friend. I had taken a minute to go across the “path” to take pictures of our booth when I saw her. We chatted for a few minutes. She professes to be a Christian. I was able to take it further and talk to her and her friend about purity. They seemed quite amazed that I was twenty-four and had never been on a date. Dad said he could see the conviction on their faces. I was very excited to be able to share with them.

I think probably the most heart-wrenching thing for me was Friday night. We were getting ready to leave, and several were still witnessing. John was talking to a preacher’s son (mid-teens). Suddenly, I heard a noise, and I turned around. The guy had thrown down his soda, which exploded, and he angrily walked off. I can still see his figure walking off into the dark night. My heart ached. Here he was, a pastor’s child but not saved. Obviously he was feeling too convicted and left. I couldn’t keep the tears back as I looked at the exploded Pepsi can, the stark reminder of this young man’s turmoil.

Saturday morning, Dad, Christopher, Joseph, and John went to the City Union Mission in inner downtown Kansas City where the guys have a church service once-a-month and hand out homemade cookies (thanks Mom, Anna, Jesse, and Mary for making them Friday night!). I went with Nathan and Melanie to the fair. It was very hot but quiet Saturday afternoon. I saw Jesus’ purpose. A girl in a booth near us, came over to talk to Melanie and I about spiritual things. Since it was so quiet, we were able to spend quite awhile talking to her. It was obvious the girl was feeling very convicted! I pray she will accept Jesus as her Lord and Savior. Saturday early evening, Dad and the boys joined us. The fair traffic picked up, and we gave out tons of sodas and tracts!

Only when we’re in Heaven will reveal the effects of this last week! It was incredible!

“So shall my word be that goeth forth out of my mouth: it shall not return unto me void, but it shall accomplish that which I please, and it shall prosper in the thing whereto I sent it.”(Isaiah 55:11).