For by him were all things created, that are in heaven, and that are in earth, visible and invisible, whether they be thrones, or dominions, or principalities, or powers: all things were created by him, and for him (Colossians 1:16)

And Jesus said unto him, Foxes have holes,
and birds of the air have nests;
but the Son of man hath not where to lay his head. (Luke 9:58)

Earlier in this trip we shared a story about how Christopher was awakened from his nap as the bus came to an emergency stop on the side of the highway (you can’t help but notice such a quick stop while riding inside the bus!) and was told by Anna that the bus was on fire. Everyone needed to get off the bus; it was quite the way to wake up!

What happened yesterday to Mom and Dad might even top that!

They were resting before the conference started, and we children were working at setting things up. They woke up rather quickly when we told them that the police needed everyone off the bus. And it was probably less than 60 seconds after the police had evacuated the bus when the shooting started. Not cap guns. Not beanbag rounds. Not pepper spray. Real guns. Even though we were safely inside the church, the gun shots were loud and startled some of the children.

But, let me back up to give you the entire story! Yesterday, after we completed our family Bible time, we began to unload the bus so we could prepare for the conference that night. I was talking with the pastor of the church, when John asked me to get my camera. I followed him out to see a raccoon in the hollow of a tree that was near our bus. We kept our distance while watching the little creature. Over time, it came out of the tree hollow and was walking (or trying to) around the grass by the bus. As we observed it, we noticed that it was acting very strange. The raccoon appeared to not have any balance, seemed to be delirious, and even seemed partially paralyzed at times.

With the conference being that evening, and the possibility of little children around the raccoon, we decided that something needed to be done with it, as we wondered whether it might be rabid. John called the non-emergency police number, and found out that the city did not have an Animal Control department. This was not a problem, though, because the dispatcher said that she would send some of “her men” out to take care of the animal. John hung up the telephone, and was walking outside when two police cars and three police officers arrived. They talked with the pastor of the church and decided that it would be best to put the animal down. The officers asked Dad and Mom (who were resting), and Christopher (working on his computer), who were all on the bus, to go into the church. The officers then fired two rounds, which quickly put the raccoon out of its misery.

Matthew 10:29 “Are not two sparrows sold for a farthing? And one of them shall not fall on the ground without your Father?”

Everyone, including the police officers, was sad to see this little animal suffer like this. But, we live in a world were sin and disease are pandemic. Everywhere we look there are results of Adam”s choice. The ultimate result of Adam’s disobedience is the fact that everyone, who has not accepted God’s free gift through Jesus Christ’s sacrifice, will face hell. I pray that everyone who reads this blog knows where they will spend eternity.

Romans 8:22 “For we know that the whole creation groaneth and travaileth in pain until now.”

Thursday, late morning at 11:30, we were driving down the interstate enjoying the Virginia scenery, but not enjoying the traffic. As the family chatted, there suddenly came a tense pause in the conversation. Just ahead we saw a little white Mazda convertible car that was smashed into the guardrail on the right shoulder. Dad rapidly started to slow down. We were concerned to see no emergency vehicles there, and only two cars stopped in the median with their hazard lights on. As we passed the wrecked car, which was still steaming, we saw a person slumped over the steering wheel, and nobody there to help. Dad stopped the bus on the shoulder, we guys grabbed the first aid kit and started running toward the car while Sarah called 911.

On the way by the rear compartment (in Uriah), I grabbed some cones and dropped them behind the bus to alert other drivers that we were also parked on the shoulder. Christopher and Joseph, reaching the car first, quickly ascertained that there wasn’t a fire, and that they couldn’t smell gas. Inside was a lady, in her late forties to early fifties, who was in shock. She was holding a napkin to her head, where her forehead had impacted the steering wheel. Christopher asked her if she was hurt anywhere else, and she said that maybe her shoulder was hurt. He was in the process of getting a bandage out of the first aid kit when the fire truck showed up, and they took over.

The two gentlemen, who had stopped in the median, by now had crossed the two lanes of traffic. We asked them what had happened, and they said that a truck had passed her and pulled in too early, striking her car which started her spinning. It appeared she had impacted the guard rail multiple times, coming to stop facing traffic, with her driver door against the rail. The car was a total loss, but her life was saved because she was wearing her seatbelt and there had been a guard rail to protect from the steep drop off.

As we started walking back to the bus, a state trooper pulled up. We told him that we just stopped to help, that the truck involved didnâ’t stop, and we didn’t see the accident, but the witnesses were still there. He thanked us, and we returned to the bus.

The Lord spared this woman’s life and gave her another chance. If there hadn’t been the guard rail, and if she hadn’t have had her seat belt on, she probably wouldn’t have survived. Our prayer is that if she doesn’t know Jesus, she would come to know Him through this. She was very blessed that her injuries appeared to be relatively minor.

I wonder if there is anyone who is reading this post that doesn’t know Jesus. We are not guaranteed another day. It could be a car wreck that instantly takes a life. It could be a multitude of possible health problems.

Life is so fragile. I would encourage you to decide where you will spend eternity. Some might say, “Well, I will decide later.” However, there might not be a “later.”  By not deciding now you are making a decision to stay in your sins and spend eternity in Hell. How many chances has Jesus given you, and what have you done with them?

Chiplet is doing very well in his temporary â€œhomeâ€. Here is a little background on how Chiplet was found. Christopher and Sarah were on a walk on Thursday and discovered a little squirrel sitting solemnly in the easement next to the sidewalk. They stopped and looked, interested in the fact that it was so little, but he didnâ€™t move. They assumed that the little guy was hurt so they called the Jesse and me to ride over on our bikes and pick him up. When we arrived on the scene he was still lying there gravely blinking at the world. I got my gloves on and carefully went to pick up the little â€œwayfaring strangerâ€. He, of course, was a little disturbed at the attempt to pick him up and tried to run. I noticed that something was a little strange in that when he tried to run he was on his side and was pushing himself along the ground. I put him into the box I had prepared and returned home.

Chiplet currently resides inside a cardboard box filled with wood chips. Since we didnâ€™t know what was wrong with him we bought some special puppy milk (because cowsâ€™ milk will make him sick) and fed him. The sad part is that when I picked him up later that day I discovered that he was deformed. Chiplet is missing his limbs on the right side. It appears Chiplet was born this way. Since we cannot raise Chiplet to go wild, we have learned that by law he has to be given to theÂ “humane society” since he is not able to live on his own in the wild. It is sad that he wonâ€™t have a â€œnormalâ€ squirrel life, but since sin entered, this world is no longer perfect. It is amazing that Jesus cares for the little sparrow, and he certainly cares for little Chiplet. We have really enjoyed our time with him.

For now he slurps his puppy milk down at regular intervals, and he likes being carried around the house. He has gained a lot of strength since Thursday, and is amazingly active and can function and move very well for what he has to work with. We are blessed to have found little Chiplet before he was found by an animal, and it will be very difficult to turn him over as required.Â 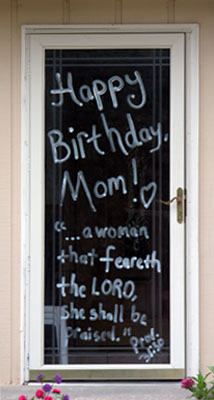