With the Covid shutdowns in March, our retirement home church was one of the first shutdowns to happen. Steve had been feeling for a few months that it was time for our family to be back in a “normal” church. However, it would have been extremely hard to leave those who were currently part of the church. Steve didn’t know how it would ever work, and then, suddenly, we weren’t allowed to have church at the retirement home anymore.

The church we have settled into is only five minutes from our home. For many years we commuted to Kansas City at least 30 minutes to church and sometimes closer to 40 since the church changed locations a couple of times.

Our heart’s desire has been to have a local church, one we can invite people to. And we did that with our retirement home church which was local, except that people didn’t feel comfortable going to it. Now our church is a known church right in our own town. It is easy to invite friends to it.

We already knew many people in the church and have met new friends. The preaching is outstanding. It is again a new season for our family after 18 years of having a nursing home or retirement home church.

For our married children who were with us at the retirement home church, Nathan and Melanie are currently attending the same church we are. Christopher and Anna Marie need to stay home because of Anna Marie’s lack of immunity because of her chemo.

We enjoy our family Sunday lunches at 1:00. That gives everyone time for their church, getting home, us getting lunch prepared, and them getting to our house. Joseph and Jesse are driving from Kansas City so that’s almost an hour after their church lets out.

“Except the LORD build the house, they labour in vain that build it:
except the LORD keep the city, the watchman waketh but in vain”
(Psalm 127:1). 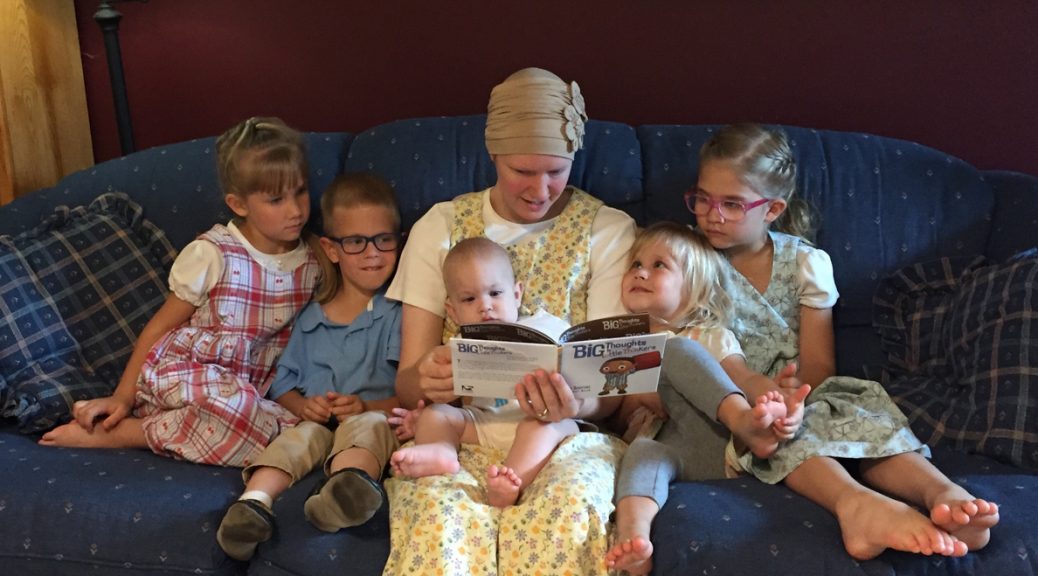 It’s been about a month since the last update update, so here’s what’s going on. Love, Sarah

It’s so good to be back home, settling into a combination of new and old routines. Since my immune system is still compromised, we are currently keeping physical distance from anyone outside our immediate family. This is very different from how our lives have been over the past few months with so much willing help from our supportive family! My sister was with me and Simon Peter since March… here for a month prior to flying back to Washington with us in mid-April, helped so much with Simon Peter’s care while there, and flew home with us and stayed for a week helping us re-acclimate, and babysitting while we had some oncology appointments in Kansas City. And obviously, Grandma Maxwell, Anna, and Mary were here for hours each day while I was gone… so it’s definitely different now. Distanced outdoor visits and walks have provided nice opportunities for chatting—and Facetime is available for other times (and states)!

Christopher’s flexibility in work hours is a blessing, and I’m grateful for his willingness to help out with the children so I can get extra rest. We were excited to start our new school year last week and are settling into a good routine. I’m so very thankful for the opportunity to learn and grow with all of them! I love doing school with them again (I find that I really enjoy elementary school in my 30’s. Any other moms relate? 😉 ) That’s certainly not to say it’s always easy, but I’m reminded again that God’s grace IS sufficient. Maybe it’s easier to remember and rest in that when peacefully quarantined in a hospital room than it is when the noise and needs of six little people are whirling around me, but my need is exactly the same and so is His grace!

There were a few delays with getting my anti-HER2 therapy going at the local hospital, but everything came into place, and I got my first subcutaneous injection there a week ago Friday. I enjoyed meeting and chatting with the nurses. From here on out (until at least April) I will be going to Kansas City for treatments on Thursday afternoons. Some weeks it will just be for Vitamin C at the naturopathic oncology clinic; other weeks I’ll also be going to the hospital for treatments. After meeting with my naturopathic oncologist and going over recent lab work, we also will be looking into dental work and chelation (detoxing my system of heavy metals) in the next few months.

It was nice to see my blood counts starting to come back up in last week’s lab draw. We were also glad that my circulating tumor cell count (CTC) showed “none detected” a couple weeks ago. While that’s not a guarantee I’m “free and clear,” it is definitely nice to have that number at zero.

Thank you all for praying and supporting us through this journey!

“And he said unto me, My grace is sufficient for thee: for my
strength is made perfect in weakness. Most gladly therefore
will I rather glory in my infirmities, that the power of Christ may rest upon me”
(2 Corinthians 12:9).

Encouragement comes often for Sarah’s books, whether through cards and letters, via email, through a blog comment, or a random phone call when someone is ordering. She is so excited about Finding Change’s sequel! This week, she hit the milestone of sending off the pre-release version to test readers, and she’s on her final weeks of editing.

“It was a true gift from the LORD to find your books recently. We ordered the whole series at the beginning of the pandemic and they have brought meaningful family time into a difficult situation. We have read the first 9 books of the Moody Series aloud as a family, and they have been such an encouragement. Thank you for writing stories where a family loves Jesus and one another. We are so grateful! You have given us a gift that we cannot thank you enough for.” In Christ, the VP Family

“To shew forth thy lovingkindness in the
morning, and thy faithfulness every night” (Psalm 92:2). 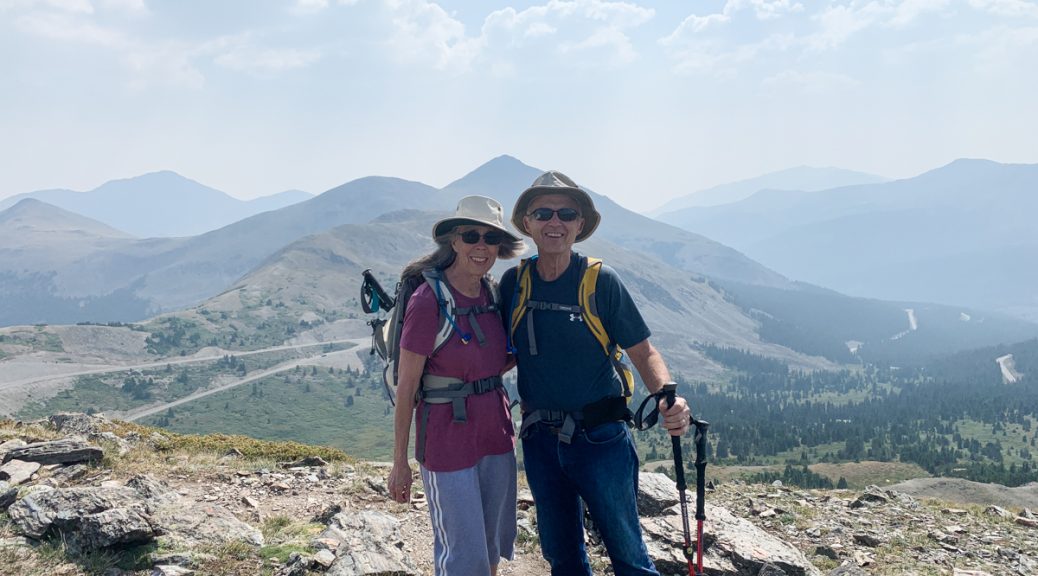 Steve and I decided a good training hike for a possible 14er our second week in Colorado would be to hike a ways up Pike’s Peak, (on the Barr trail) while we were staying in Colorado Springs the first week. Pike’s Peak is a 26 mile round trip 14er, not something we would be capable of doing in a day.

We arrived at the trailhead at 4:30 a.m. so we hiked the first 1.5 hours in the dark using headlamps. That gave us beautiful views of the lights of Colorado Springs. It also gave us quite a surprise at about 2 miles up.

There we reached a place where we had to climb some steep steps. They were so steep, we had to lean forward and use our hands for support for the next step, much like climbing a ladder. After about ten or twelve of those steps, thinking we must be about done with them, we looked up, since it was just getting to be a bit light, only to see the steps go on and on and on. We both knew we couldn’t make it up them. So we began to slowly clamber back down.

About that time, a very fit young man passed us going up the steps. In our conversation with him, we discovered we had made a wrong turn in the dark (just a few feet back), left the Barr trail that goes to Pike’s Peak, and had gotten on the Manitou Incline. The Manitou Incline is a series of 2,744 steps that gain 2,000 feet elevation in a little less than a mile.

We backtracked and found the trail again. We were impressed as we hiked on to find out that some people (obviously quite fit) climb the Manitou Incline and then run down the Barr trail. We met several of them as we continued our hike.

At about 2.5 miles up the trail, we stopped to talk to some hikers who were taking a break. When we picked up our hike, we hadn’t realized we were at a junction and ended up heading the wrong direction for about a half mile before discovering our mistake.

We hoped to make it to the Pike’s Peak base camp, which is about 6.5 miles up the trail, but decided with the extra mileage of our wrong turn and how long we had been hiking, that we should turn around at the 5 mile marker.

We were happy we did. Going down, the temperatures quickly rose to close to 90, and for the last 3 miles we were hotter than we have ever been on a Colorado hike. In the end, we clocked 12.25 miles with 2600 feet elevation gain. From start to finish, it took us 6.5 hours.

“And the heavens shall declare his righteousness:
for God is judge himself. Selah” (Psalm 50:6). 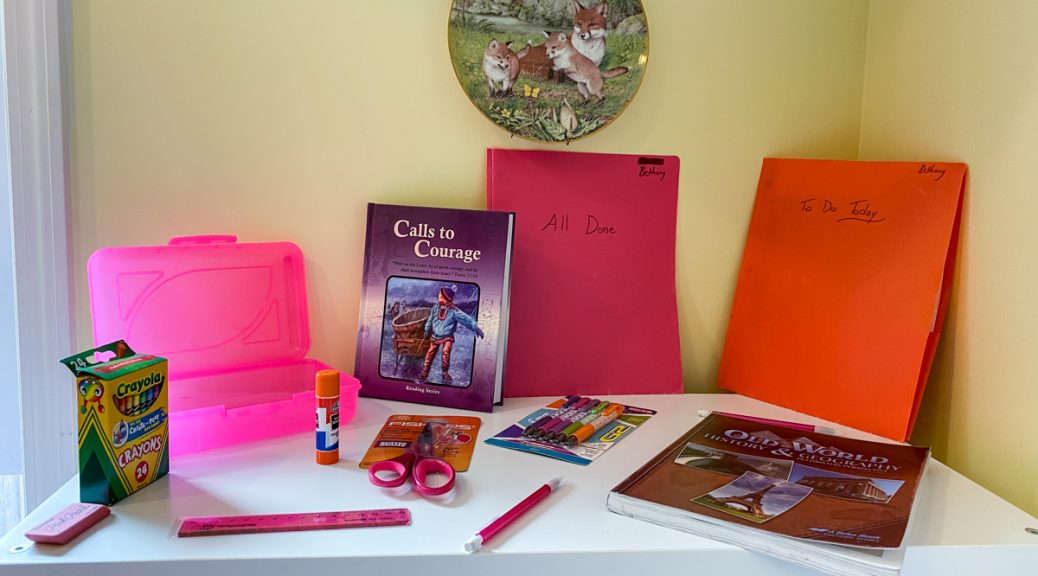 A new school homeschool year can present formidable challenges when the anticipated first day of school ends up disappointingly overloaded, stressed, and frustrating.

This is a simple way to avoid that. Break that first day of school into smaller, more reasonably sized activities that you do before you actually want to begin your bookwork.

See how Melanie did her homeschooling startup this year.

“Giving thanks always for all things unto God and the
Father in the name of our Lord Jesus Christ” (Ephesians 5:20).

Happy Birthday, Mary! We’re so grateful for the testimony you are of serving the Lord Jesus and loving those around you.

Mary faithfully gave of her time for the months Anna Marie was gone. She took the commitment seriously and gave up other things to help.

Mary is calm and poised. She finds joy in the small things. Mary’s sparkle for life is beautiful. We love her so much!

Happy Birthday! Although you aren’t in the mountains this year, we’ll still have a special day celebrating YOU!

Love,
Sarah for the rest

“For whosoever will save his life shall lose it; but whosoever
shall lose his life for my sake and the gospel’s, the same shall save it”
(Mark 8:35).