Here is the awesome report of the Mount of the Holy Cross. Enjoy the climb with Anna, Jesse, and Mary!

We left the cabin just before 2 am, bound for Mount of the Holy Cross; it felt early but there was a nice moon when we started. It began raining part way through the drive but by the time we reached the turn for the dirt road, it lightened to a drizzle. That dirt road took us up onto the mountain, and as we climbed, it became clear we had entered a thick cloud.

We arrived at the trailhead around 4:30 am to complete darkness and heavy mist: good thing we brought our lights (just kidding, we always do that). The forecast predicted it to be a beautiful day—clearly, they were just referring to the “day” part of the day. 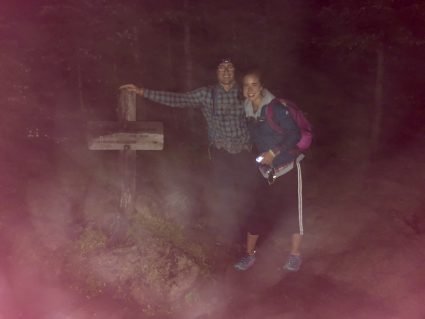 We started at the wrong trailhead (because us) but followed a social path to the right trail (because GPS). We occupied ourselves with much interesting conversation on the way up, and as the sun rose, we kept expecting (really, “hoping”) the clouds to clear off. The drizzle changed to sleet and then to snow. Even though the sun had risen, the visibility remained minimal. As we climbed above the treeline, the wind grew stronger, and it always felt great when we got to enjoy a switchback where we faced away from the wind. 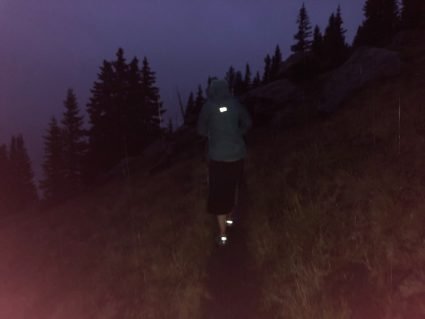 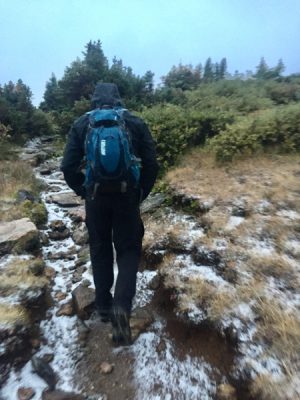 We had decided to do a variant of the route on the way up. This approach allowed us to do a full circle instead of the standard out and back. The neat thing about the route is that it took us right by the Notch Mountain Shelter—an impressive stone hut built in the 1930s for religious groups who made pilgrimages to Notch Mountain in order to see the nearly 1,500’ tall cross couloir on Mount of the Holy Cross (essentially gullies that intersect). Notch Mountain stands opposite the Mount of the Holy Cross and the cross is dazzling when snow lays in the couloir. 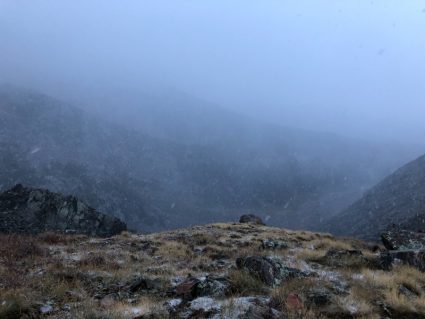 We were a bit chilly by the time (7:45 am) we reached the ridge upon which the shelter was built. We welcomed the reprieve from the wind and snow that it provided. The view, of course, was quite unremarkable—only about 100 yards of ridge which disappeared into clouds racing by. We unsuccessfully attempted to warm up inside the shelter while taking opportunities to look out the large window occasionally. 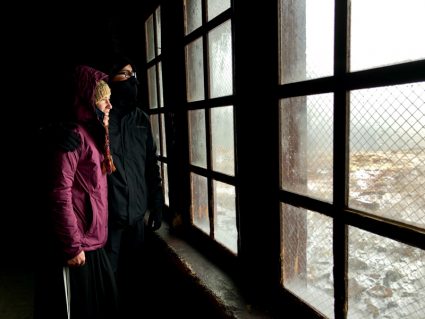 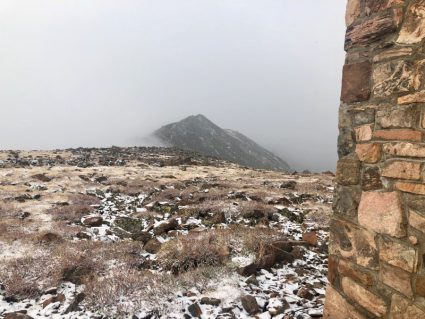 We hoped the storm would clear and celebrated the signs of sunshine and blue sky that started around 8:30 am. Then the most stunning moment came—one that we were all so awe-struck by we didn’t think to grab any pictures.

The clouds cleared enough that we could see across the bowl to the Mount of the Holy Cross. The cross couloir had a layer of snow in it which dramatically set it off from the dark rock around. A photo wouldn’t have captured half the sight anyway, so perhaps it was ok to just leave in our minds. The vertical gully stretched from near the bottom of the giant face to the top with a slanted shelf appearing like a crossbeam that ran horizontally almost the width of the mountain.

The clouds continued to clear until we were at last surrounded by big, open sky. This was more like it. At 9:30, we considered all the conditions and decided we were ready to press on. Let the work begin! 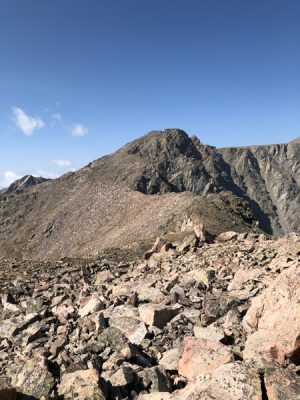 Not limited to the trail which ended at the shelter, we bid it farewell and started the 3-mile trek across the ridge over to the summit. By this time, the snow had melted from the cross couloir, and it was only then that we realized the magnitude of the beautiful gift God gave us in allowing us to see it with snow.


We greatly enjoyed the route across, and the weather stayed nice the rest of the day. It was a bit strenuous due to the terrain and the fact that we only dropped below 13,000’ once the entire ridge. We also crossed two ranked 13ers and an unranked one on the way over so there was good up and down. This traverse offered terrific views of the surrounding region. 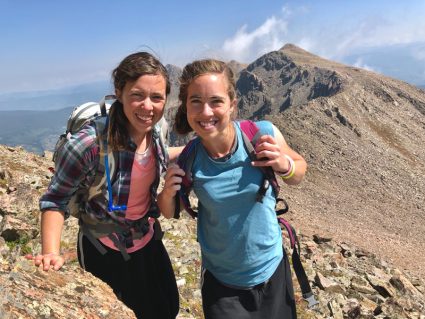 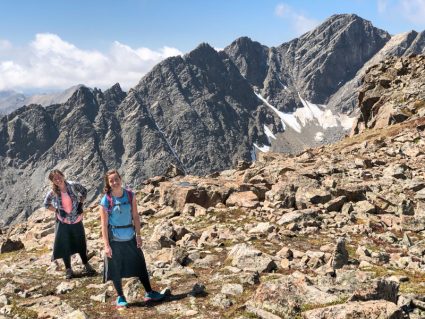 By early afternoon we made our final ascent and summited the Mount of the Holy Cross. So far, we had seen no other climbers, and we had the summit to ourselves. The views were spectacular, and we took in every bit of beauty we could during the short time we were on the summit. Looking back across the bowl to our lovely Notch Mountain Shelter was rewarding as it stood as a tiny spec on that giant ridge.

After refueling, we started descending and enjoyed the excellent route and the warm sunshine, while trying not to let the wind knock us over. In the valley, we stopped at a lush mountain stream to refill our water before climbing 1,000’ over Half Moon Pass. This part ended our singularity as we passed a steady stream of other hikers coming in to camp in the lovely valley. Some of them looked well prepared and others didn’t look prepared at all—we hope they all had a good time. 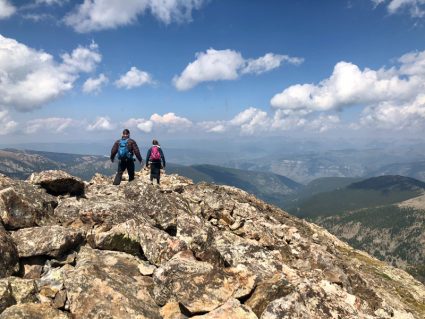 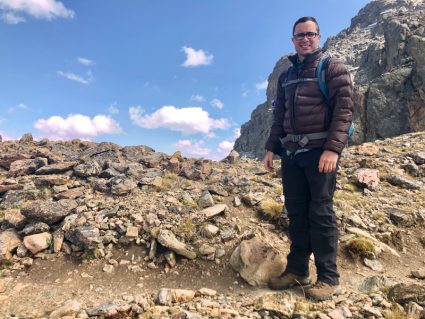 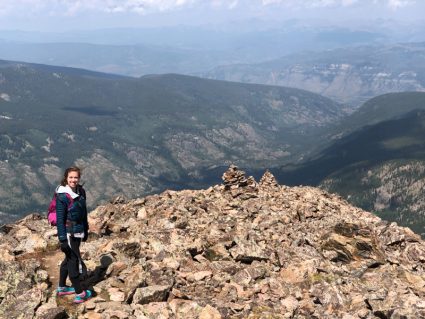 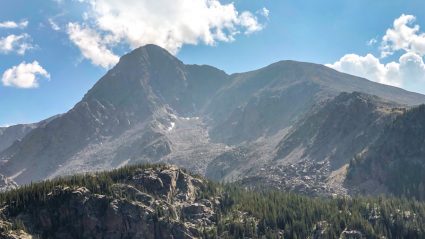 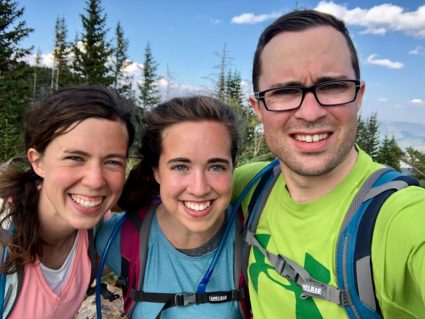 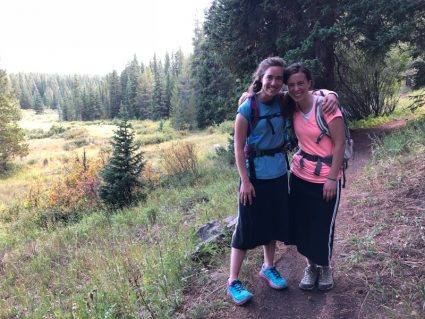 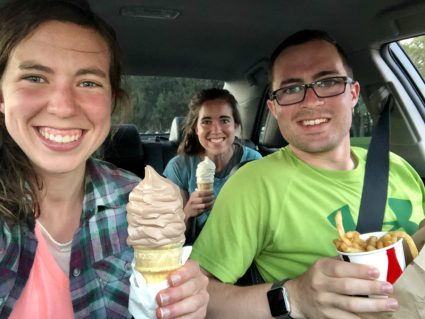 We reached our car late afternoon and celebrated the amazing day and the neat memories we had made together. While it was one of our last 14ers in that range, we decided it was the prettiest. We were so grateful that God cleared the weather off (had it kept snowing we would have turned around) and the amazing opportunity to see the cross couloir with snow it.

“Enter into the rock, and hide thee in the dust,
for fear of the LORD, and for the glory of his majesty.”
Isaiah 2:10

10 thoughts on “Mount of the Holy Cross”