The American flag waved proudly under a rich blue sky as we drove through the entrance to the Leavenworth National Cemetery. In the back seat, sat three of my sweet nieces (Abby, Bethany, and Tina), accompanying me for this little excursion. 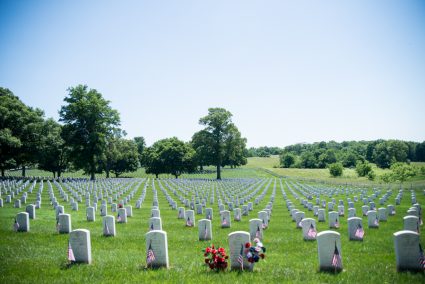 At our first stop, we climbed out and looked at some of the headstones, and I explained things about them. Then, we crossed the street and came to a section where a number only had one date listed. All that was known about these soldiers was their name, their rank, and when they died. No birthdate. 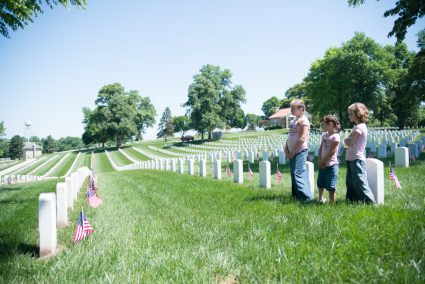 The girls gazed around at the rows and rows of white headstones, signifying those who gave their lives for our freedom. We drove a little further, and I saw a whole section with dates from World War II. 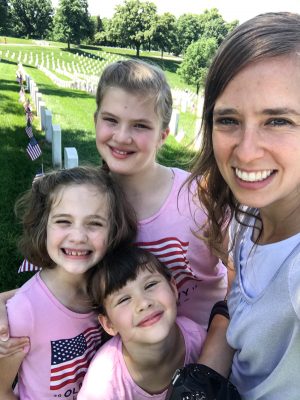 Christina, who is almost 6, does not remember Grandad, but she knew he served in the military. I loved hearing her say in the most heartfelt tone: “He was so kind to do that for us!” Yes, she could see what freedom costs. Although Grandad didn’t die in combat, he earned two purple hearts and was seriously wounded in Vietnam.

One sees rows of headstones in a beautiful national cemetery, but what one doesn’t see is the heartbreak behind those lives. People who are forever changed because of their loss. Their loss to gain our freedom.

I looked at my little niece standing between two headstones, her sweet poise, her adorable smile, and yes, her spunky braids: they died for her freedom. 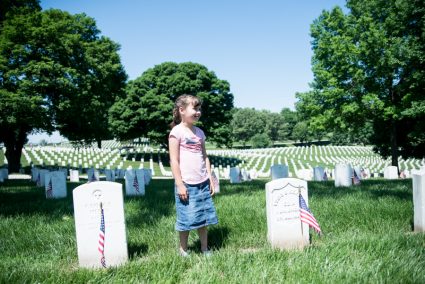 While they obtained our earthly freedom, Jesus bought eternal freedom with His sacrifice for those who repent and believe on Him.

Thank you to the men and women of the United States Armed Forces for securing our physical freedom.

Thank You to my most precious Lord and Savior for securing my eternal freedom.

“Who his own self bare our sins in his own body on the tree,
that we, being dead to sins, should live unto righteousness:
by whose stripes ye were healed.”
1 Peter 2:24

15 thoughts on “The Price of Freedom, A Tribute to America’s Fallen”