Fresh cherries at our house meant homemade cherry pie. Homemade cherry pie meant rolling the extra pie crust dough into cinnamon and sugar slices to be baked for eating. On this occasion, though, after one pie-crust bite, John said, “Mom, I wonder if you put something other than cinnamon on the pie crust.” Sure enough, cayenne pepper sits in the spice cupboard right next to cinnamon, and that’s what was liberally sprinkled on the pie crust. Looking at the pie crust, we couldn’t tell the difference, but the taste shouted it! 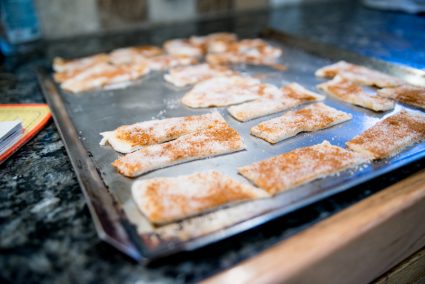 Before I was saved, that was true of me. I thought I looked good on the outside but inside was different. I remember the day I was saved, the pastor had just said, “You can fool everyone around you, but the Lord knows your heart. If you haven’t repented of your sin and placed your faith in Christ, you are not saved.” Those words burned through my facade.

There have been times since then when my outside was put together, but the inside was not. Once I confessed my struggles with depression to my church family, I began to heal. They hadn’t known what I was dealing with inside.

What about you? Is the outside one way, but the inside another? Does the Lord want you to do something about that—discuss it with your husband, share it with a friend, ask for prayer at church?

“But the LORD said unto Samuel, Look not on his countenance, or on
the height of his stature; because I have refused him: for the LORD
seeth not as man seeth; for man looketh on the outward appearance,
but the LORD looketh on the heart” (1 Samuel 16:7).