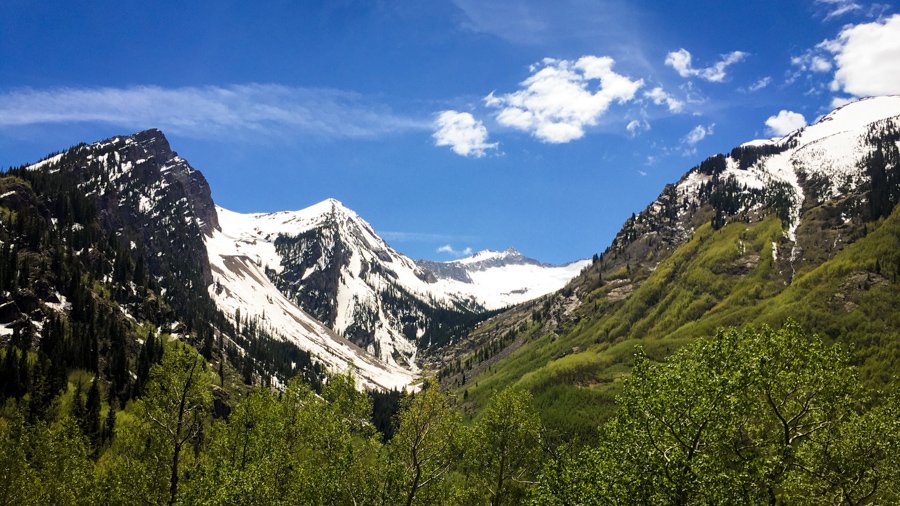 A while back, John and I decided that we should go on a backpacking trip together. We knew that with our work and the rest of life, we needed to simply schedule a trip or else it would never happen. Sometime a few months ago we decided on a weekend in the middle of May. Due to some unrelated things that came up, we pushed the trip off for two weeks—to the first weekend in June. This ended up working out incredibly well as Colorado had a very large snowstorm the weekend we had originally chosen. Honestly, when we first put the date on the calendar, we didn’t think at all about snow. Either way, with the date set, we collected the necessary gear and chose our destination—the Snowmass-Maroon Bells Wilderness area in the Elk Mountain range of Colorado.

We left early Thursday for the 12 hour drive. We picked up snowshoes in Denver on our way up to the mountains. We arrived at the trailhead mid-afternoon and hiked a few miles up the valley that evening. About a mile or two into it, we came across a few black bears who were near the trail. Fortunately, though, we didn’t have trouble with bears during our time. In that area, it is required that food be stored in bear canisters—large plastic containers that are supposed to be bear “proof.” I suppose seeing the bears confirmed to us that there were indeed bears in the area. 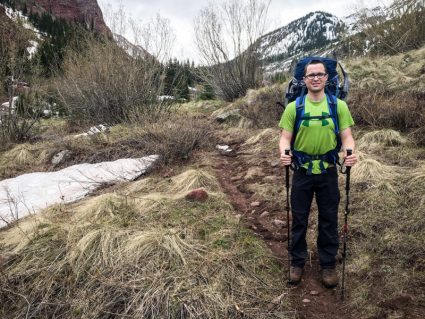 The next day we spent a while snowshoeing—which was a great experience. They effectively prevented “post-holing” but also made traversing hills a bit less convenient. We eventually decided to turn around when the terrain became fairly steep and the snow structure had changed to where the top layer kept sliding on us. While the trail formed a loop, we opted to come back around and go up the other valley (where the loop would be coming down).

We hiked down, around, and into the other valley. That trail was more established, and the valley was even prettier than the first. Our campsite that evening would be difficult to improve on. It was situated in a large, clearing within easy walking distance of a rushing mountain stream. It felt wonderful to be in such a beautiful place and disconnected from cell service. 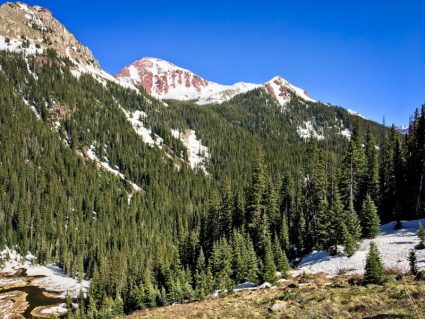 After a hot breakfast the next morning, we set off up the lovely valley. At one point, we got a terrific view of one of the Elk’s 14ers—Snowmass Mountain. The views the entire trip were great. Further up the valley was an interesting stream crossing. A log jam had formed over the swollen lake/river and was the only “dry” route across. Fortunately, some of the logs were stable.

We then hiked and snowshoed through the beautiful forest above the lake. I liked how quiet and serene it was. Even though it was melting quickly, the snow was still quite deep. The whole environment made for a very peaceful setting.

We took it easy on the last day of our trip. After waking up with the sunrise, we made coffee, broke camp, and then hiked out. It was a great trip, and John and I had a fantastic time together. I don’t believe the pictures adequately communicate how pretty the scenery was. Even though I was tired at the end of each day, it was very refreshing to spend those three days in the beauty of God’s creation. And, if any of you are interested in going backpacking and haven’t before, here are a few things we learned as first-timers:

While we have been tent camping before, John and I enjoyed taking it up a level by fully disconnecting for a few days. The Snowmass wilderness area is remote and absolutely beautiful.

“When I consider thy heavens, the work of thy fingers,
the moon and the stars, which thou hast ordained;
What is man, that thou art mindful of him?
and the son of man, that thou visitest him?”
Psalm 8:3-4

15 thoughts on “A Backpacking Trip for John and Jesse”