I have five brothers, two older and three younger. When Joseph, John, and Jesse were little guys, and Nathan and Christopher were in their teens, you would often see them working with Dad on projects in the evenings or on Saturday.

From redoing landscaping to finishing a basement to just the normal handy-dad project—my brothers were there and involved with whatever Dad was doing. As you all know, including younger ones requires extra effort. Okay, so that’s probably an understatement. A lot of extra effort. (If you’d like more information on including your boys in work projects, I highly recommend reading Preparing Sons. It comes in paperback, audiobook CDs, or MP3 download.)

Fast forward and that fruit of including boys in projects pays off. All five of my brothers have a broad skill set, and I believe that’s due to my dad investing in them!

Skip ahead even more years, and it’s a delight to see the three married brothers doing work projects with their little ones.

Take, for example, Nathan and Buddy on Saturday. Obviously Buddy isn’t really a help at this point, but working with his daddy will strengthen their bond and begin creating in Buddy that desire to be a diligent worker. Give Buddy another 10 years, and I promise he’ll be quite a handy little man! 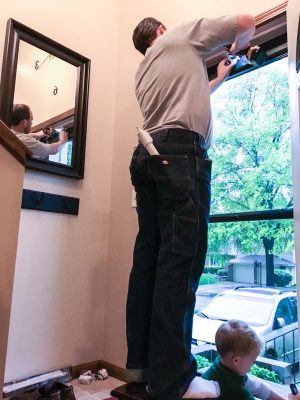 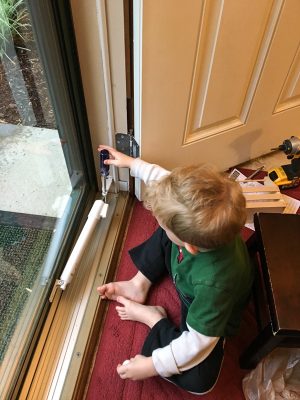 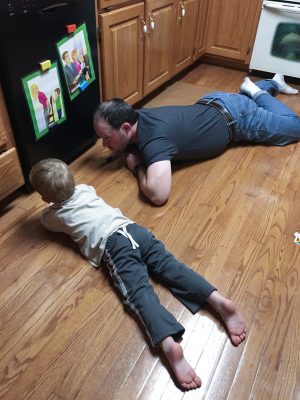 Buddy credits Aunt Anna with teaching him how to get dressed. (Anna has helped out at their house before and after Benjamin’s birth.) In Buddy’s defense, it’s easy to get the front and back of clothing a little confused sometimes. 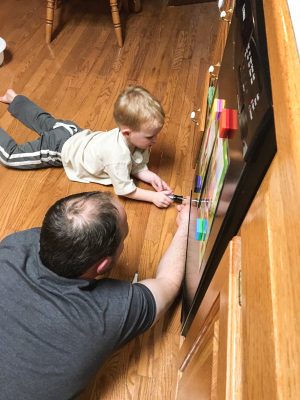 “For thou shalt eat the labour of thine hands:
happy shalt thou be, and it shall be well with thee.”
Psalm 128:2

11 thoughts on “A Dad and Son Work Project”