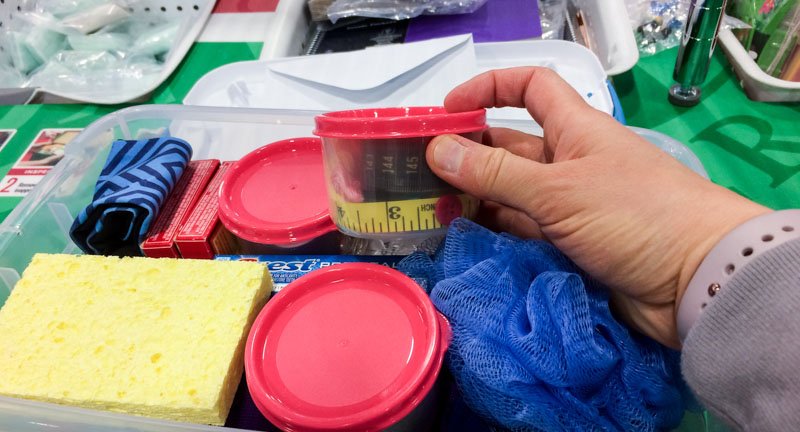 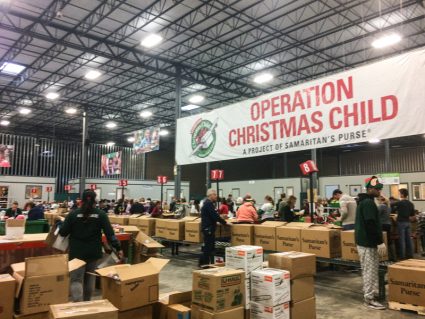 We arrived at the Operation Christmas Child (OCC) warehouse Monday morning excited about our days of volunteering. After checking in and orientation, we were taken with some others to a processing lane.

There were 16 lanes, and on each lane, you could have 10-13 people working (or, as little as 5 if you had one side going, which we did a few times). Each lane was made up of two sides, where the exact same work was going on. The first person on the lane grabbed the shoebox from a big container, took off the rubber bands, and checked to see if someone had enclosed a donation for Samaritan’s Purse, and if so, you dropped it in the money box. This was called a pre-inspector. They then passed the box off to an inspector, who would check if there were any objectionable items such as liquids (definitely saw hand sanitizers, shower gels, and even snow globes!). If the box wasn’t full, they would add filler items that had been donated from many different places (often there would be two inspectors, so two pre-inspectors needed to keep four regular inspectors going!). Next, someone would secure the box with tape, and hand it off to a packer, who would put the shoebox in the proper age/gender box. If the label was a “Follow Your Box” scannable label, someone else would scan it. 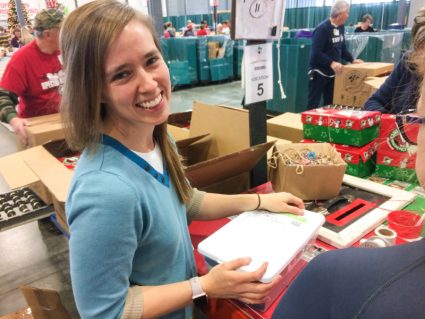 We girls worked a variety of jobs, but my favorite was the pre-inspector! I really enjoyed seeing the creativity and love people put into their boxes. Anna was the master taper, and on Monday, she and another worker had taping-contests. Anna could really fly through her boxes, and that job requires strength and stamina (I know, because I did it for just a little while and came away with a big appreciation for all of Anna’s work!).

Mary was a cheerful helper, sometimes packing boxes into their ultimate shipping box, or scanning boxes, or inspecting or pre-inspecting—just wherever she was needed. She was also our go-to girl on items that might have been gray-areas if you had a question on that (“Hey, Mary, what about glow sticks?”). 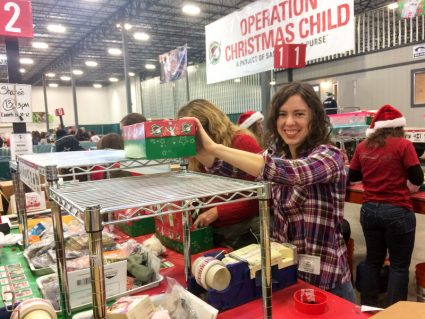 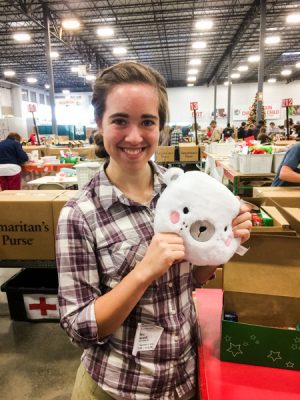 Between the three days we volunteered, we worked with some super awesome people. Some came for just a morning, or some came for all week (Hello, Tammi, and Jim & Linda!), but we were all there with the same goal: to bless children! We talked, and laughed, and encouraged each other. We were truly a team. 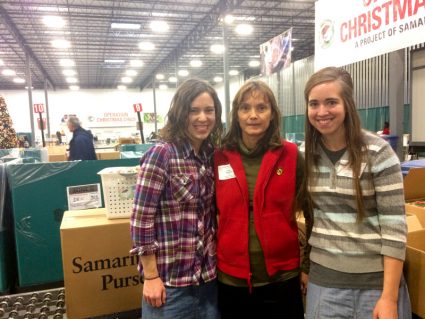 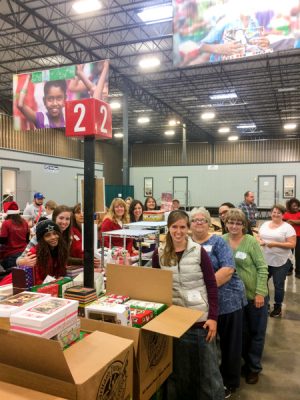 Several times a day, everyone stopped working, and an OCC staff member led us in prayer, and we laid hands on the boxes. It was sobering to think we were the last people to handle the boxes before the children. And, oh, how exciting it was to hear Monday night, that boxes were already on a truck and headed down to El Paso, and then to cross the border to Mexico! Such precious cargo on its way!

Samaritan’s has distributed 120 million shoe boxes since their inception, and their goal is to never give a child a shoebox twice in their lifetime. I have to say, I used to wonder when they would hit market saturation. They won’t. Why? Listen to something that totally shocked me and made me realize that 9 million shoeboxes this Christmas is only a drop in the bucket. If OCC had taken all 120 million that they’ve given out since the 1990’s, and given that 120 million to India last year, 280 million children in India STILL wouldn’t have a shoe box. Y’all, that’s in India ALONE! Talk about amazing.

With that in mind, Denver’s processing plant still needs help these next 10 days to process the boxes. Their goal is 800,000, and they had reached the 400,000 mark when we were there, but that’s a little over half way, and their goal end mark is Saturday, December 17th. They encouraged people to invite friends/family/their church. And since we have a wide blog readership, I’m encouraging you to jump on board if you live in the general area, and help OCC out.

It’s an amazing way to share God’s love with little children in other countries! You won’t regret it! 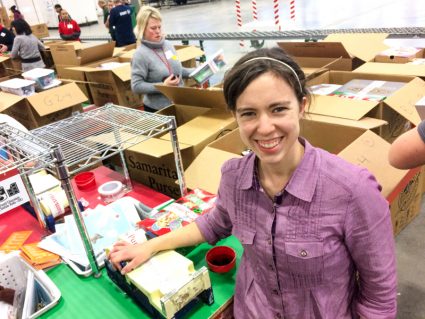 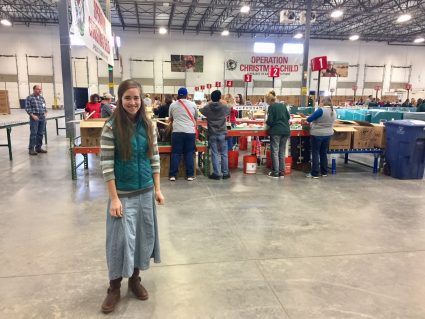 “But whoso hath this world’s good, and seeth his brother
have need, and shutteth up his bowels of compassion
from him, how dwelleth the love of God in him?”
1 John 3:17