Jesse’s Thoughts: I enjoyed the opportunity to go to the fair and witness last week. I spent most of the time walking through the carnival area looking for a chance to give a tract to and speak with young people. A number of the groups were interested in talking, and we had enjoyable conversations as a result. There were some who participated politely and then others who moved on. I appreciated every young person who took the time to talk about their eternal destiny, and I pray that the Lord might use the discussions to bring them to Him.

One of guys that I talked with and remember in particular was at the previous fair that we had gone to and had been part of a group of guys that I engaged with at that point. This time, though, he was with a different friend and as we were starting into a discussion about what he thought, he encouraged me to take his friend through the Good Person Test. His friend was extremely interested and thoughtful about what would happen to him after he died. The Lord also blessed us with nice weather that night which made for a great time altogether. 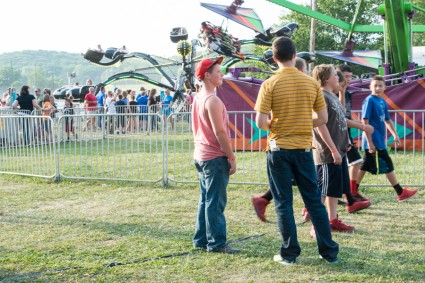 “For whosoever shall keep the whole law, and
yet offend in one point, he is guilty of all.”
James 2:10