We celebrated Anna’s 18th birthday late (on Friday), and we wanted to give you a taste of what a birthday is like, at home and after the fact, and with an unusual twist in the evening. When we did a day with Abby earlier, people enjoyed it so much and requested something similar with a person in our immediate family, so here it is.

The day started out, not quite as early as some, since the girls didn’t exercise before Bible time. A little before 5:30 a.m., it was time to get up to be ready for Bible time at 5:45. All six of the children at home meet Dad in the living room for our own individual time to read God’s Word and pray, but we like to arrive early to be able to chat and visit with each other. 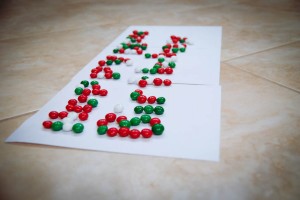 What greeted Anna in the living room? A “Happy Birthday” sign made with Mint M&Ms.

Around 7:30, fresh muffins were available for breakfast, made by Sarah. A “page” was made throughout the house, announcing they were out. We even had enough to send to all THREE sets of relatives.

After breakfast, Anna had to start on a mission. It was decided at the last-minute to make matching outfits for Anna Marie, Melanie, Abby, and Bethany, to match us girls for our family picture (planned for this Tuesday). Anna began looking for patterns.

Then, it was time to make phone calls. What JoAnn’s store might have the fabric? Sarah had amazingly found the receipt from when we had bought ours in April, so that allowed Anna to approach the task more easily. After spending time on the phone, it was discovered two stores had it, but of course not the closest ones. Grand Island, Nebraska (not an option), and Topeka, Kansas (1 hour 15 minutes away). So, Dad graciously said he’d go to Topeka to get the fabric.

Time flew by, until it was 10:30, and Anna was going to squeeze in a little time to work with Sarah. Anna is training to be able to do Sarah’s job. For now, this will help Sarah to get the Moody book written, but as is hoped, someday the Lord will bring the right guy for Sarah, and she’ll no longer be available to do what she does.

Two book reprints need to get done, so Anna got to take the “master” seat and do hands on work with Sarah overseeing and coaching.

11 a.m., and it’s GiGi and Grandad’s time. When Joseph was a little guy, he used to ride on the back of Mom’s canister vacuum. At that point, Grandad and Grandma offered to watch the younger ones so Mom could clean without distractions. That special Friday time has continued over the years. Now, little Abby, the great-granddaughter, gets to join, but the numbers are slimmer as children have graduated. Lately, it’s been just Anna, as Jesse and Mary have needed the time to do school since we have been gone quite a bit since September.

That line of cars is actually a parade.

Playing with Aunt Anna is so much fun.

After Anna comes home, she’s not really hungry for lunch, since a snack is always served on Fridays at G&G’s house, plus, a special dinner is coming up, so after chatting with whatever family members are around, she goes to practice her fiddle. Anna’s time is filled to the brim, and even though she’s done with school (graduation family party coming soon!), she does not lack for things to do. In fact, she’s busier than ever.

Cleaning used to happen on Friday mornings, but since Mary is busy with school, cleaning is done Friday afternoons or Saturdays. One of Anna’s chores is to polish the glass top on the stove.

When cleaning is through, it’s time to get ready to leave. Leave? Where? We’re going out to eat! A VERY special treat: Olive Garden. Let’s backup. On Anna’s actual birthday, in Spokane, when, bless her heart, she was totally down and out, a family gifted her in an incredible way. They handed a card to one of the Maxwells at the conference, and it was for the birthday girl. Upon opening it, Anna found a large amount of money, and it was indicated that the birthday girl could take the family out to eat at Olive Garden, and maybe she would like some of the relatives to join us. Anna was extremely overwhelmed by this family’s generosity. What a treat it was for all 16 of us to go out!

Dad asked the waitress how we could pray for her, and she was surprised by such a request and paused. She asked us to pray for “strength,” and upon inquiring what that exactly meant, she said she was a single mom and needed “strength.” We definitely prayed for that and for her salvation! 🙂

Nathan and Abby (with her little jumper that a family gave to her in September).

This was the first party with the newlyweds back and a new addition to the family: Anna Marie (welcome!).

It was a rainy, autumn evening, very reminiscent of what October 31st weather is normally like. We were so grateful to be together in a cozy setting. Miss Bethany decided to be awake and crying, but after Sarah finished her meal, she took a turn with Bethany, and eventually Bethany fell asleep.

We had a sweet time in God’s Word after we got home. Nathan had to go back to work for part of the evening, thus he was missing in the picture above.

Then, Anna opened presents, with help from Abby, who was extremely delighted to be apart.

Turtle cheesecake time (minus the pecans). Sarah had made it the day before and put the final toppings on just before the actual event.

Dessert was enjoyed, and it was a special time for all.

Some of the relatives began to make their departures after dessert/cleanup, and Abby was promised by her daddy that she could play with Aunt Anna for just a few minutes.

Thank you for coming along to take a peek into this birthday at home (after-the-fact!).

“Who can find a virtuous woman? for her price is far above rubies” (Proverbs 31:10).

29 thoughts on “An Unusual Birthday: A Day in the Life of Anna”