Little Chippy (the orphaned squirrel we’ve been raising the past few weeks) was finally released on Saturday morning at 9:30 a.m. It was quite the event. All of us were in the backyard, along with Grandma and Grandad, to see what would happen.

We had been working to transition Chippy to his new home. It started by buying a little rubbermaid shoebox and drilling a hole in the end of it. We then filled it with wood chips and put it inside his larger cage. The idea was to create a safe home that would be inside his cage and would keep him dry and protected from cats once we had moved his cage into the tree. It took him a day to adapt to his new “shoebox” house – but he did great.

Next, we moved his cage (with the shoebox in it) out onto our back porch so he could enjoy the sunshine and get used to being outside.

The final step was to put the cage (and shoebox) up into a tree. This was a big step for him because we actually installed the cage upside-down in the tree (the cage has a wire mesh top and a plastic bottom). We wanted the plastic part at top so he would have even more rain protection. We took all the wood shavings out and put newspaper down so his feet wouldn’t get caught in the wire mesh. Jesse helped with drilling some boards to install as a base for the cage, and Grandad helped Joseph attach the cage to the tree and the boards: 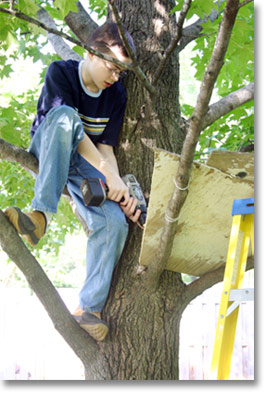 ChippyÂ seemed to quickly adapt to his new surroundings.

Saturday morning at 9:30 a.m. was the time for the “opening of the cage”. Joseph and Anna opened the cage: 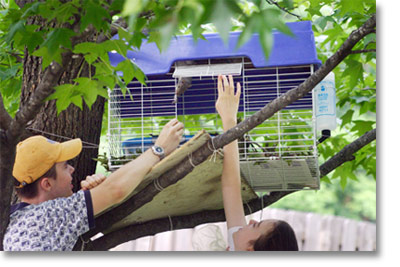 It did not take long for Chippy to come out of the cage and begin to enjoy his freedom! What a blessing it was for us to watch as he began exploring up and down the tree – venturing out on each limb. We rejoiced in his freedom, in much the same way the Lord must rejoice when we are willing to surrender our sin and live in wonderful obedience (freedom) to Christ! 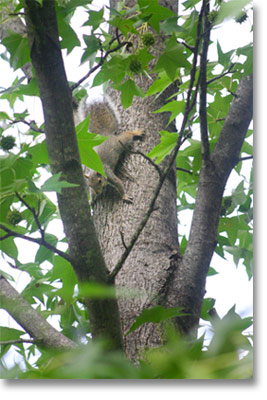 Very soon, we found ourselves staring up into the tree to see where Chippy was at (yes, this does put a bit of strain on the neck): 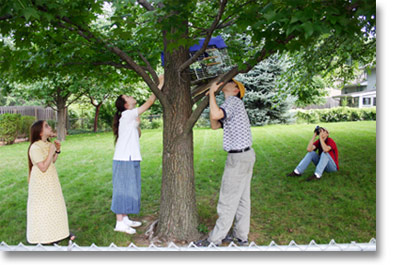 It has now been several days that he has been enjoying his freedom. We haven’t seen him leave the tree yet, but know that he will be exploring more and more as time goes by.

At the door to his cage (the wooden slats across the opening to the cage which are visible in the background were designed by Joseph to keep cats out of the cage and also hold the door open): 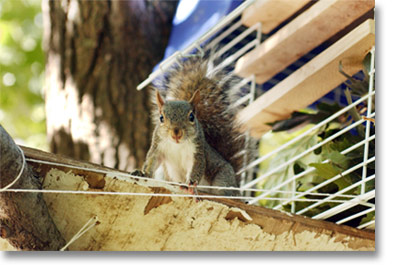 Enjoying a snack on his “front step”: 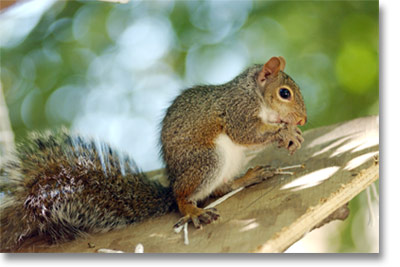 For some reason, he enjoys hanging upside-down in his cage to drink his water! 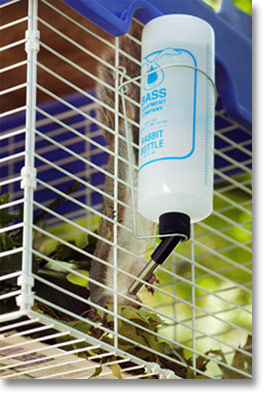 We’ve enjoyed watching Chippy in the tree – and wonder if he will be around when we return from our upcoming trip in early October (today is a big packing day!). While we’re gone Grandma and Grandad will be filling up his water and leaving food for him (he – as any good squirrel should – enjoys nuts).

We’ve been amazed as we have watched Chippy naturally "be" a squirrel – following the instincts which God has given him. While we will miss interacting with and caring for him, we’ll definitely notice and appreciate the little squirrels that are around us much more! 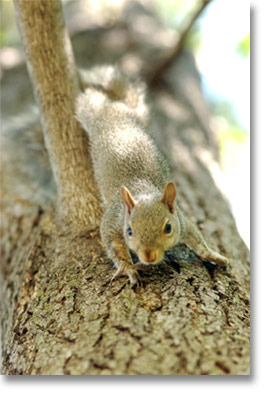 3 thoughts on “Set Free! (the squirrel)”