What an amazing week it turned out to be. We ended the week feeling a bit drained, yet praising the Lord for the strength He provided us throughout the week and Sunday was truly a wonderful day of worship and rest.

Friday night and Saturday were much busier and seemed to blur together somewhat. We ended up staying quite late Friday night, but the Carnival was open late as well. Saturday morning most of us went to the Mission and were there until mid-afternoon. Sarah went with Nathan and Melanie out to the Fair around lunch time but things were very quiet until the evening. We joined them around 6:00p.m.

The temperature Friday evening was much more moderate (especially once the sun had set). Saturday was quite warm, but nothing like Wednesday.

We probably gave out about 750 sodas/waters Friday evening, and a similar quantity on Saturday. It became even harder to hand out “new” tracts to people that had been by a number of times during the week but it was good as we recognized them to have more opportunities to share one-on-one. In fact, I felt that Friday and Saturday were the best nights for one-on-one sharing.

I kept doing balloons each night and did hundreds of additional balloons. Nathan helped with pumping them up and tying some of them to give my fingertips a break (and speed things up!). It can be a challenge to keep rolling along quickly when you have a group of 5~10 children (and their parents) waiting for balloons. But, the parents (and children) that were waiting for balloon provided good opportunities for conversations.

I can recall several instances of being able to share with people about their salvation. One teenage boy started by asking about dinosaurs in the Bible, and after we talked about that we moved onto salvation. He seemed typical of so many we spoke with: he admitted that he didn’t truly know the Lord (despite having prayed a prayer when he was younger and occasionally attending church). We talked about the missing part of salvation in his life: repentance (not only feeling badly about sin and confessing it, but turning from it); and how the Bible never says to “accept Jesus” but to repent and believe on Jesus. He hadn’t given control of his life to Jesus. You could see the Spirit working in his heart. I gave him a Gospel of John at the end of our conversation.

Friday night I enjoyed an opportunity to talk with a “goth” couple. They had walked by the booth a number of times throughout the week and refused the offer of free soda’s. Finally, late Friday night, when I offered them a balloon they stopped and said “sure.” Turns out the girl had young twin sisters and was interested in two identical balloons for them – and they accepted sodas and tracts while they were there.

We haven’t figured out the totals for the week, but I would guess about 2,000~2,500 sodas/waters, perhaps 4,000 gospel tracts, and likely had opportunity to share individually with several hundred people.

We believe that one of the biggest keys to the Lord’s blessing throughout the week was the fact that we were not affiliated with any church, and that we were not “bankrolled” by a church advertising/evangelism budget. Quite a few people asked us what church we were with, and we’d say we were just a family that had a desire to share the gospel. People were genuinely surprised that we would invest in such a project without having as a goal the building of a church’s membership roll.

As a final example of how the Lord so tremendously blessed during the week, I would love to share an amazing story, but am limited because this isn’t an anonymous blog. Suffice it to say, it was a perfect example of how the Holy Spirit works in hearts. A young person that had been watching us closely throughout the week, at one point came up to one of us and was asking questions about salvation, and sharing how the Lord had been working in their heart! They had been broken by what they heard and observed.

And now here are the promised photos! 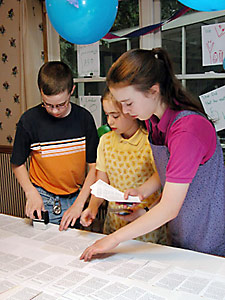 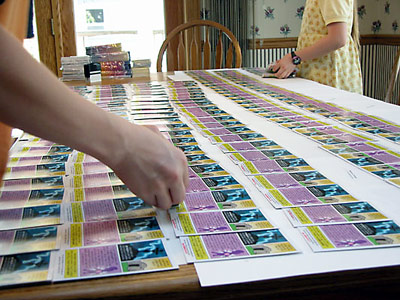 Here is Dad, Nathan, Melanie, Sarah, John, and myself at our booth
(Joseph took the picture): 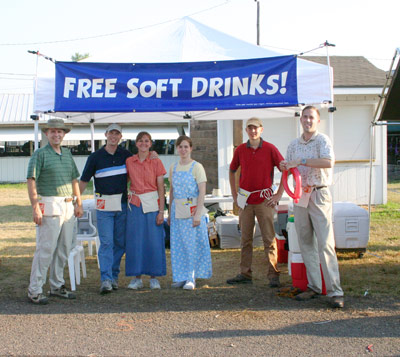 Here is our booth from the back. We had a table at the back for stacking tracts and Bibles, and would resupply our aprons from there. We used Home Depot aprons for this year, but if we do a Fair outreach again we’ll cover up the Home Depot logo 🙂 We put the coolers on little plastic patio furniture stands. You can see the carnival in the background: 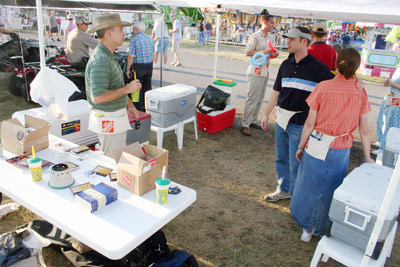 Here I am making a balloon bumble bee and talking with a young fellow: 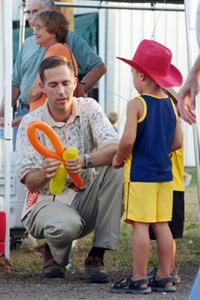 Here is a series of photos showing John giving out a tract. If you look closely (it’s a bit hard to tell since the sun was on the two pieces of paper right then), you’ll notice that in the first photo the John has asked the boy which piece looked larger, and he is pointing to the blue one (on the left). In the second photo, John has swapped the tracts around and now the pink one appears larger. The third photo shows John explaining that they are gospel tracts (the writing is on the back side) and he’s giving them the tracts. Notice the young boy on the far right with the big smile. The pink/blue tracts came from Ray Comfort’s Ministry (LivingWaters.com): 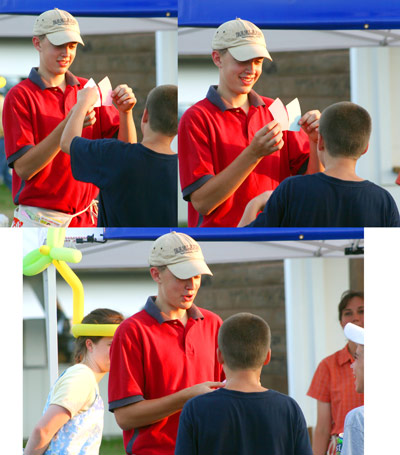 4 thoughts on “County Fair-report by Christopher”